I have finally moved my website content over to dreamhost. The Net4 account has been utter nonsense, with its idiotic control panel and silly pricing. For more or less the same price, I am hosting two websites on dreamhost with unlimited email aliases, subdomains, mysql database, host of apps and a really good control panel. Livejournal has been fairly sucky too lately with its random downtimes, ads and loads of comment spam.

Everything looks pretty much the same right now, but I’ll soon start making changes. I will send requests to update planet links (at least wherever I know I am syndicated) once I have everything in place. I need to write up a bit on the couple of sessions I’ll be doing at FudCon Pune. this coming weekend, hopefully by tomorrow.

Firefox (or is it google?) seems to think that ceo.maharashtra.gov.in is a suspicious site. It apparently hosts malicious software which gets installed without user content.

The site runs on Linux, so surely it couldn't be ActiveX stuff right? Or maybe google going bonkers.

Update: Someone pointed out that I'm an idiot and I need to double-check facts before I post. I agree with him/her.

Finally got my very first owned vehicle, a Honda Aviator. Got the dealer to deliver it near my home since I only have a learners license and have never really ridden a scooter/motorcycle for anything more than 5-10 minutes at a time :)

Well, the dealer (Kothari Wheels in Pune, look them up, they’re good) was kind enough to show me how to start it, various controls (ignition, horn, lights, indicators, etc.). And when he realized that I have never seriously ridden a scooter before, he sat behind me and gave a brief 5 minute lesson around the block. I mustered up some courage and decided to take the scooter to fill up some petrol -- it had only 1⁄2 litre and most of it was gone since he’d ridden almost 15 km to get the scooter here. Anyway, I took the scooter out and reached the gate, only to have it stall there -- the tank was empty :(

I walked to the nearest petrol pump only to see that it was shut, walked back, walked my scooter back into parking and came back home. Now to get some petrol tomorrow and take her for a ride :)

End of the Interweb

This comment on Slashdot serves as a warning to everyone who is looking to try out Internet Explorer 8. Here's what a Google search on ie8 brings up: 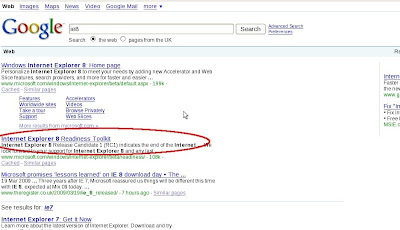 And Speaking of head gear....

I joined Red Hat on 27th January. Now I can finally work on FOSS during work hours and try to make something worthwhile out of myself.

Pune seems to be a real nice city except for the public transport. I’ll have to learn to ride a bike and get one myself soon. The weather’s great though…

I had thought of posting a pic of my new Red Hat cap but bluetooth’s not working on my new laptop (company provided :) ) yet… rest assured that it looks cool though ;)

Right now I am not tied to any employer; ended my 2 year association with TCS yesterday. It’s not that it’s not a good place to work; it is. But it just doesn’t do FOSS. It uses FOSS, just doesn’t contribute. Hence, I’m jobless for now… probably on Tuesday I’ll be wearing a different cap ;)

I've had virtually no internet access since I came back from FOSS.in/2008. And now that I finally have it, things are changing big time and I have virtually no time left to spend on my laptop. Some changes are due after this Republic Day (26th January). Stay tuned :)

A gas stove and utensils to cook, a mattress to sleep in, clothes, soap and water and…

That's my new weapon, which I've finally got working amidst the usual Diwali fever; shuttling between Kharghar and Mira Road and generally trying to get my home in shape for our first Diwali. Anyways, on to the weapon in question:

The entire package cost only 29000 INR from Croma and I slapped on 999 INR for an HP PSC. A discount on being a Tata employee meant that the PSC was effectively free :)

Tried Mandriva, Fedora and then finally went back to Debian because I didn't want to waste time trying to stumble around another distro. Yes, I've been too long on Debian (6 years) and every other distro seems to me as being deficient in some way or the other. Mandriva is too much GUI; it's almost as if it doesn't care about anything else. Fedora is really good, but just not Debian. It puts too much into the default install and seemed to want to connect to the internet each time I search for package descriptions on the package manager. Anyways, my opinion in this case is probably slanted because I tried Fedora only for a couple of hours, enough to download a Debian Netinstall CD image ;)

The four hour journey to work and back and our system performance issues at work are becoming a pain now. I started working on the facebook plugin last weekend and it’s just stuck at that. Hopefully there will be some respite next week.