The last day of FUDCon. I had not slept much the last couple of nights, so I slept in a little late. Due to this I reached the venue late too and found that a lot of the speakers had reached late and that seemed to have got the volunteers (understandably) a little annoyed. All of the action was to happen just in the auditorium and the seminar halls this time and I stuck mostly to the auditorium for most of the day. I had planned to work on the libgqpid library, but I had not decided what it is that I was going to do. I started off by writing my day 1 post. That was quickly followed by lunch, where we hogged on pizzas.

I told Kushal by that time that I will work on autotoolizing libgqpid since he was busy working on his book. I started working on that after lunch, quickly finding out that there are a few things that wouldn’t work very easily there.

AC_LANG_POP After this one little hurdle it was pretty much smooth sailing and the result was a pull request to Kushal for the patch. By early evening, everyone was done and ready to go. The volunteers, especially the girls were very excited about getting their pictures clicked and were calling all of the major organizers (Rahul, Amit, Satya, etc.) to get their pictures clicked with them. It was pretty entertaining to watch.

This was followed by a cake, which was mostly eaten and the rest of it smeared on Rahul and Jared’s faces. To end the event, we had a feedback session with the volunteers and they gave us a few good tips on how we could have done some things better.

By the time we were back at Magarpatta City, everyone looked tired. Rahul had organized a parting dinner at the Cocoon for all the speakers and organizers, which was a lot of fun. I had a great time chatting with Heherson, Izhar, Arun S A G, Srishti Sethi, Anurag and Eugene Teo. After dinner it was time to head back home.

We did a lot of things right in this event and kudos to Rahul, Amit Shah and all of the core team for getting together a really great event. I hope that at least some of all of those college students make the transition from being users to being contributors, especially contributing code to Fedora and upstream projects.

The title pretty much summarizes what most of my day looked like on day 2 of FUDCon. Well, not exacly, but it comes quite close. I had three sessions lined up in a single day and I was worried that I might lose my voice by the end of it. Ankur Sinha had all of 4 talks in the single day, so I was definitely better off that him.

The day started with Harish Pillay’s keynote on the community architecture team. The turnout on day 2 was less than that on day 1, which was a little surprising. Most of them trickled later in the day, so it meant that a large number of the attendees in Harish’s talk were Red Hatters and the CoEP volunteers. We probably started a little too early for a Saturday.

Immediately following that was my session on qpid messaging. The attendance in the session was modest (about 8-10 people), but the best part was that they were very involved in the session and that made the session worthwhile. Mrugesh Karnik also joined the session mid-way and asked some really good questions that actually helped my session. We ended up doing a queue design for a fictitious stock trading system and I was able to show how the design could scale very easily with a qpid messaging broker in place. Unfortunately, most of the attendees did not have laptops, so I could not engage them in a hands-on session. In fact, that was my story of the day to a large extent. I had intended all my sessions to be hands-on, but most of it never really materialized because most of the audience did not have laptops.

After the qpid session, I spent some time chatting with Sankarshan, Mrugesh, Anurag and Nisha over lunch. After that I decided to double-check my exploit code samples because it was the one session that I had never done before and it was something that is not my area of expertise. The only aspect of the exploits that I was really comfortable with was how they worked and how I could explain that using the usual tools like gdb, objdump, etc.

I was sitting in the speakers lounge cleaning up my examples when Aditya Patawari came in and asked me about my session. That reminded me that I had to actually go into the session :D We quickly left for the classroom and found pjp finishing up his python session, which had a packed audience. Once he was done, a lot of people left, which led me to think that even this talk was going to have a modest audience. However, people trickled in as I was about to begin and by the time I did begin, the room was full.

The exploits session was probably one of the best sessions I have done so far, mainly because I personally enjoyed it. The audience also consisted of people who were interested (exploits are sexy, as someone said later) and I got a lot of questions during and after the session. The talk also seemed to give some people from the audience the impression that I am a security expert, which is flattering but incorrect.

Then came the awesome part where Pai and Yogesh Babar followed up my session with impromptu sessions, which the audience lapped up eagerly as well. Pai talked about extensibility of postgresql by making it call routines in perl (typical dinosaur stuff ;) ) and Yogesh did a talk on kdump. I learnt later that Rahul Sundaram did something similar in one of the seminar halls by asking the audience to “ask him anything about Fedora and Open Source”. Pretty cool stuff.

After Pai and Yogesh were done, it was again time for me to get on to the platform for another session, this time on autotools. This was something I had done multiple times with the same examples, so it was pretty uneventful.

Day 2 was probably awaited by a lot of people for another reason -- the FUDPub! We went to Park Estique near Vimaan Nagar for dinner. There was loud music and bling bling lights and food and drink. I enjoyed the food and drink; the lights gave my a headache and the loud music was, well, too loud. In any case it was fun chatting with people and having the really good food.

Like the first day, I did not get to attend any other sessions, this time for a different reason. I’ll probably submit less sessions in the next conference so that I actually get to attend other sessions and meet and talk to more people. I did meet a lot of interesting people on day 2, so all of that hectic schedule was completely worth it. 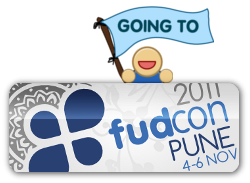 and I’ve got a lot of things to do once I’m there!

FUDCon Pune 2011 has a wonderful line-up of talks and sessions going for it this weekend. I have added three workshops of my own too:

I finally got involved in preparations for FUDCon this week to try and help wherever needed. Rahul suggested I help out with the schedule arrangement, since I had some ideas on the layout of some sessions. We slugged it out for about 4 hours yesterday and another 3 hours today at the Red Hat office, trying to make sure we schedule talks in a manner that attendees can follow tracks (virtualization, security, web apps, embedded, etc.) and at the same time, have enough flexibility to add talks and sessions without having to shuffle things around all the time. Saleem has become a pro at copy-pasting across cells in spreadsheets as a result.

The end result is pretty impressive and we’re expecting even more submissions to keep people busy. There were concerns on whether there were too many sessions running in parallel, but I don’t think that matters. The event attendance is expected to be quite large, so there will e enough audience to keep all speakers busy. Besides, I don’t know a single conference where one gets to attend each and every talk in the conference. The real fun of the conference is to meet friends, collaborators and fellow geeks and not just sitting in rooms and listening to people talk.

Oh, and we have hackfests throughout the day on Sunday. The one I am particularly psyched about is Kushal Das’ libgqpid. It was an idea we had brainstormed about earlier and he wrote a lot of the code in it. Hopefully we can get a release out on Sunday with the core qpid client features ready. For the uninitiated (which is pretty much everyone I guess, since Kushal has not published the code yet), libgqpid is a glib based C wrapper around the qpid C++ client.

Looking forward to having a great time at FUDCon!

I've been in the US for a week now. I've reached Raleigh, the final destination in my short trip in the US. I'll be here for another week before I go back /home. I was in Westford last week and in Boston over the weekend.

I was in Westford to get trained to support Red Hat MRG Messaging. The upstream for this is the Apache QPid Project. This seems to be a very promising product, especially with its speed of messaging. The training was fun and I got to meet some really cool people here, including fellow GSS geeks Ryan Mitchell and Andrew Blum. I got a chance to interact with the qpid hackers too, which was really cool. I attempted to dig a bit into the code to understand some random stuff, but haven't made much headway since.

I left for Boston on Friday and spent the weekend there. I only had enough time to visit the Museum of Science and the Aquarium. We managed time pretty badly though; we could have squeezed in some more. I met up with Philip for lunch today at an interesting place called the Toro in South End, Boston. You gotta go there to try the bone marrow tapas. It was awesome.

Waiting now to get to the mother ship, the GSS headquarters tomorrow; a chance to meet people who I work with across the oceans and across time zones.